Here are the latest photographs for all four of the sale bulls for 2015. Each reference sire is also included on the herd sires page of the website, and for the first time we are able to provide the pedigrees with some really useful EBVs to assist in the decision-making …and aren’t these figures great by the way? Allistair is happy to discuss each bull with you in detail should you wish. Please just drop him a call over one of the evenings, or hook up with him at either of the sales.

The first three bulls, D. Tarantino 159, D. Threadneedle 187, and D. Ultimate 200 will be offered at the Cathcart Bull Breeders Production Sale on Tuesday 22 September 2015, while D. Undone 209, a promising 2 year old JSF Gauge son, will be on offer at the Farmer’s Choice Multibreed Production Sale at 11h00 on Wednesday 16 September 2015 at the Riverview Trading sale pens in Alexandria.

He has stood out and raised interest since he was still on his mother, and being our best (and last) Shadybrook Scotty 083K son (known for calving ease, low birthweight, EMA, milk and post-weaning growth), we have used him over two breeding seasons. He has some outstanding autumn calves on the ground with us that are weaning shortly, as well as some more calves being dropped now in August and September. We have collected him, and with plenty of straws in the tank he will form part of our ongoing AI programme for years to come. He is just on 3 years of age now. 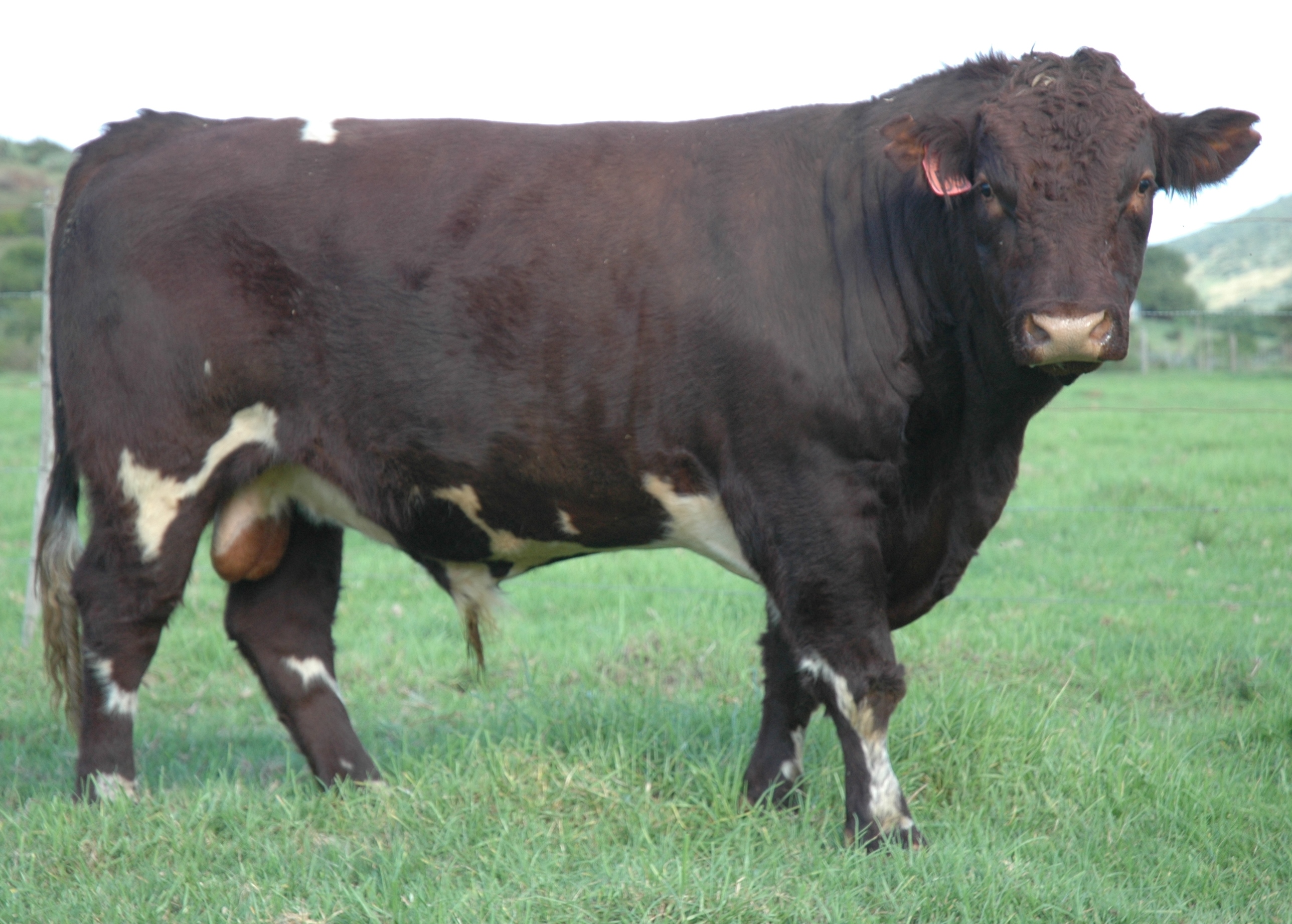 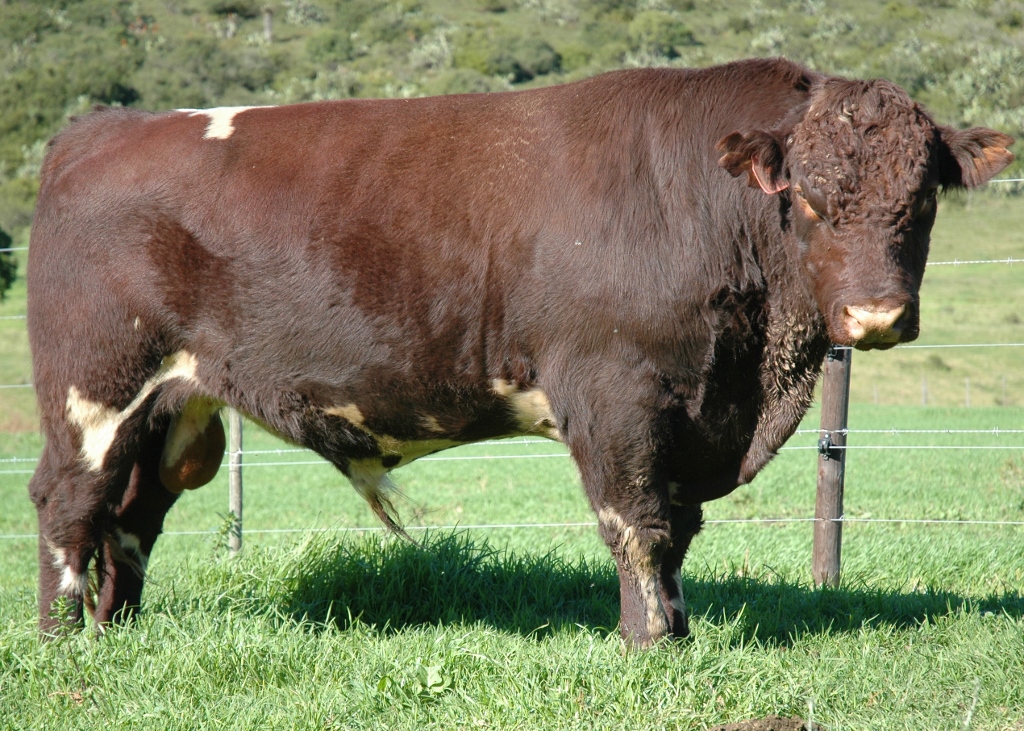 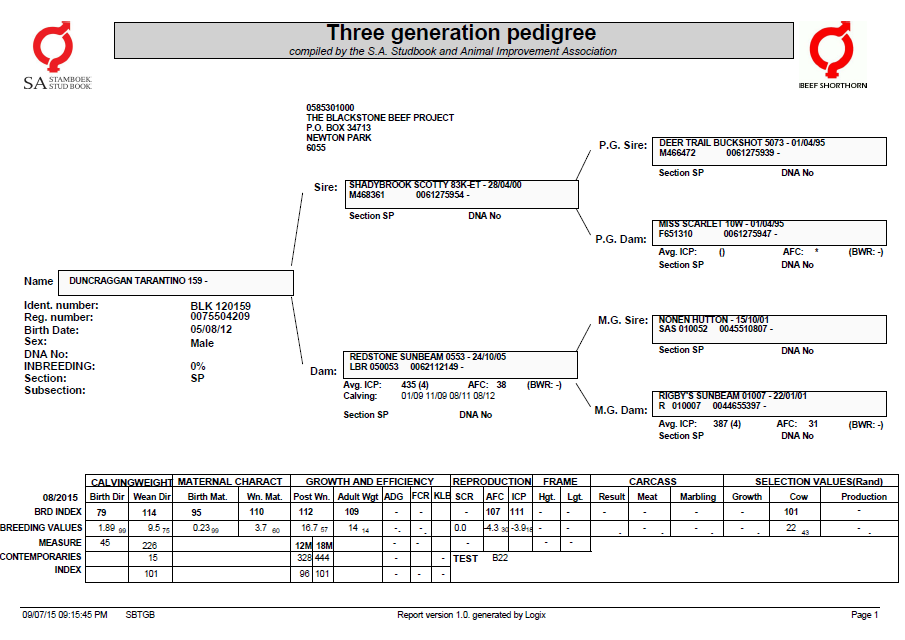 He is a solid red (and he breeds red with 10 red and 7 dark roan calves out of the 17 we have on the ground from him). He is out of Carnarvon Wildeyes 02 17, a maternal granddaughter of the legendary Morphie Vector, Gold Cup winner at the Rand Easter Show. She was one of a parcel of five, proven, 2002 drop Carnarvon Creed daughters we acquired at the Carnarvon Dispersal Sale in 2009.

He has turned out to be one of our best Duncraggan President 049 sons and was held back from our 2014 Annual Internet Bull Sale to use ourselves. Like his sire, he exhibits good length and growth, a tight sheath and long, soft muscling.

He has impressed with his outstanding masculinity and virility. As a two-year-old, he was used over a group of 18 open females, in a bunch of 43 females, for 65 days over summer in the hardest veldt on Forest Glade, with only a phosphate lick, and settled them all. He is just on 3 years of age now. 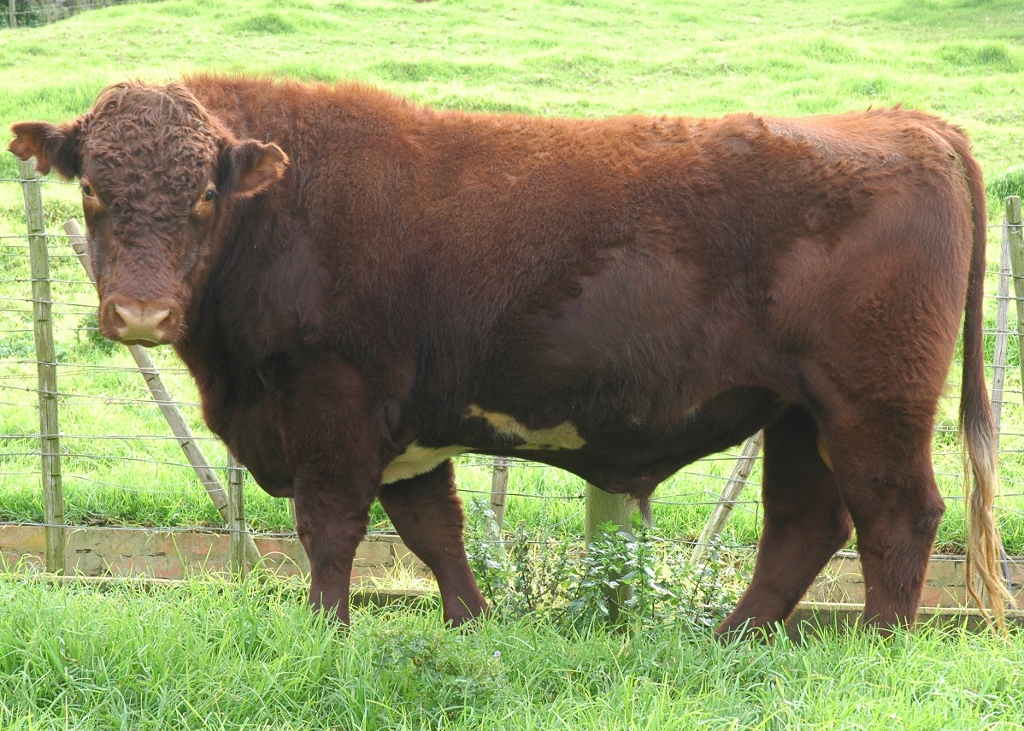 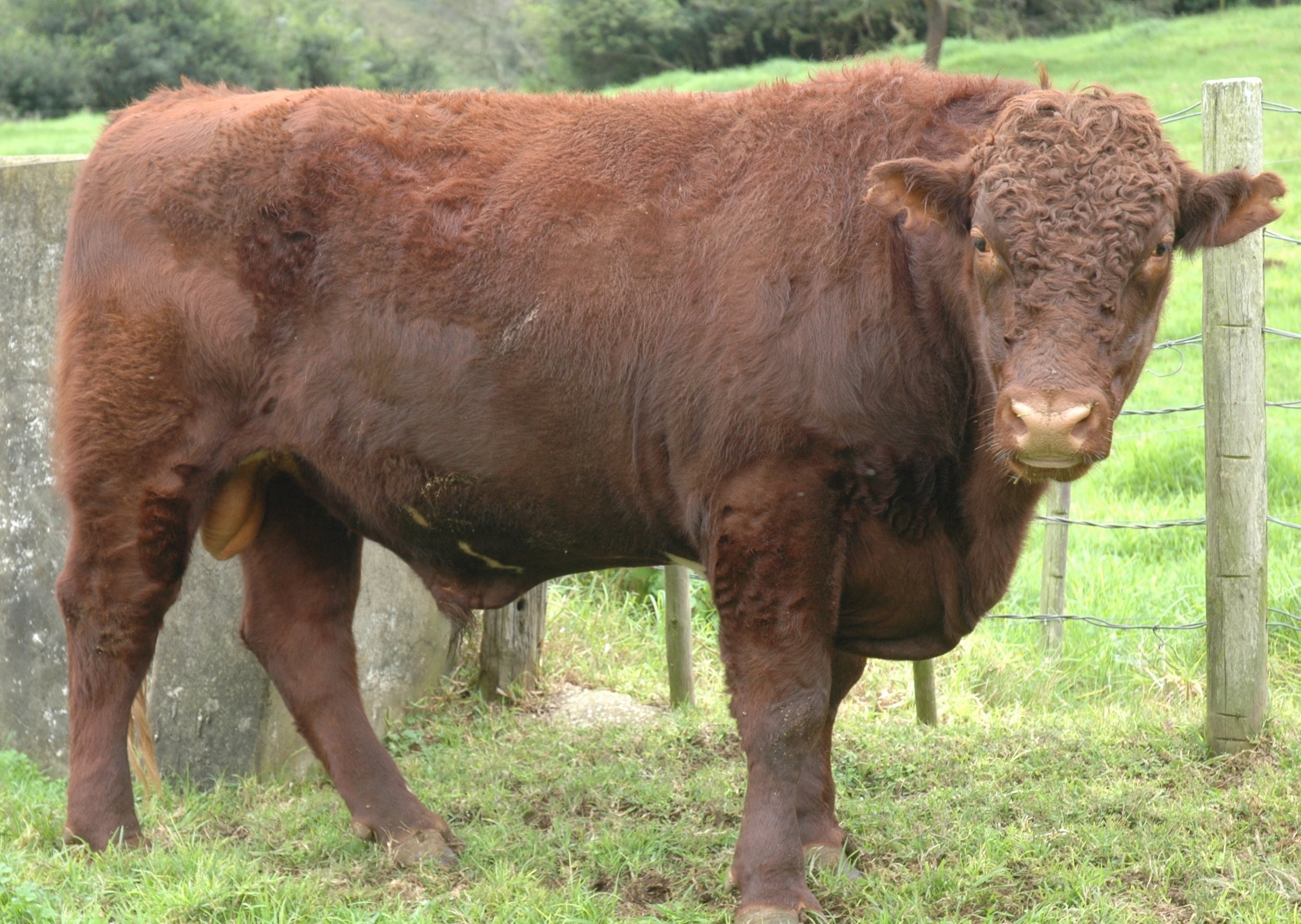 He is another solid red, and a standout son of Duncraggan Ronin 073, the top selling bull at our 2012 Annual Bull Sale. He is now doing duty at the Brosterlea herd in Molteno. NOTE: Undone sells at the Farmer’s Choice Multibreed Production Sale in Alexandria on the 16th September.

Meet the final in the line-up, also solid red, he is the 2 year-old son of JSF Gauge 137W, out of Redlands Elizabeth 4 29, a Rigby’s Magestic 9943 daughter. His dam was acquired as a mature cow from the Redlands herd and had an ICP of 362 days over 5 calves with us.

He is an early maturing bull with excellent early growth, moderating as he matures. He had a predictable low BW of 35kg and a WW Index of 110. He is easy doing and is always in good condition. His sire is number one in the breed in the American Shorthorn Association Fall 2015 Trait Leaders table for Marbling. He also rates as number 15 for Calving Ease Direct, number 15 for $CEZ Index and number 23 on the $BMI Index.

In our opinion this bull is suitable for heifers due to his 113 Birth Direct Index and his 104 Birth Maternal Index and should produce tremendous replacement females for your herd. 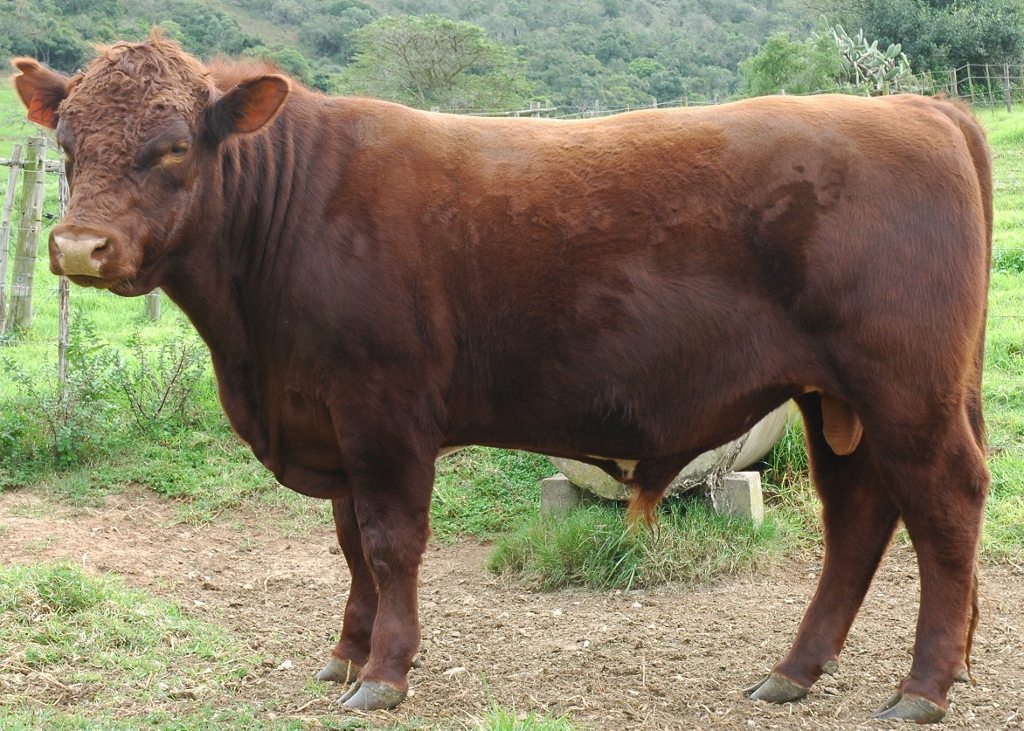 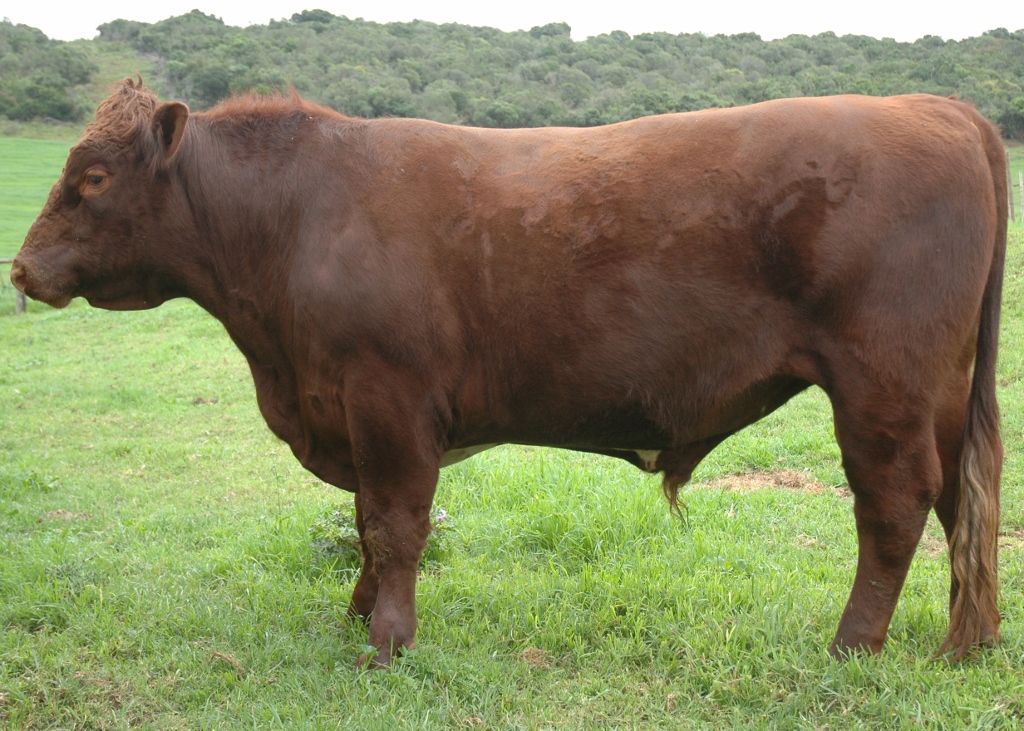 With the 2016 Cathcart Bull Breeders Sale approaching on 23 September 2016, we present a summary of the bulls on offer from Duncraggan Beef Shorthorns.

As usual, all the bulls have been Phase A and B performance recorded with S. A. Studbook and they also have current Logix Breeding Values from August 2016.

The Spring 2013 bulls have been Falkirk Certified in their contemporary group, the Autumn 2014 bull was the sole bull retained after weaning and therefore has no other contemporaries! We imported our first tranche of semen in 2012 and he was used heavily in the 2012 Spring and 2013 Autumn breeding seasons:

He was selected due to his excellent BW and CE EPD’s, in a moderate frame. The solid red colour was an added bonus!

His figures have improved since we first used him and in the ASA August/Spring 2016 Trait Leaders list he now ranks in the Top 10 on seven traits, five of those in the Top 5 in the breed!

We feel that the combination of calving ease (Direct and Maternal), Ribeye area, Marbling and Fat thickness EPD’s is hard to beat!

Red, polled. Falkirk Certified. A bull with good length and long hindquarter muscling. Used as our heifer bull in Spring 2015 and as a pick-up over all our Autumn 2016 calving cows and the heifers.

Out of one of our Tukulu Duchess family cows, D. Duchess 063. A consistent producer of outstanding progeny, all her calves to date have been retained in the herd! 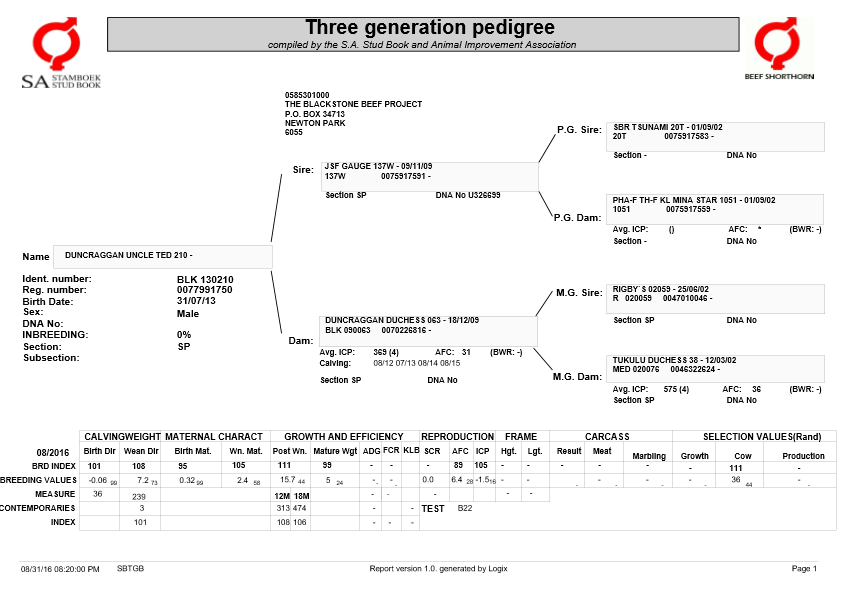 Red, polled. Falkirk Certified. He is a solid, cherry-red bull with a well-rounded hindquarter. Slick coated. One of the most virile bulls we have produced in the last few years, his poll was bald during the breeding season! He was used on all the white cows, and the roan cows with white calves, during our Spring 2015 joining.

He is out of a Carnarvon Augusta family cow by Wauldby 0407. She has produced a number of good progeny, her 2015 bull calf, D. Willy Wonker 337, by D. Smashing Stuff 103, also receiving a Silver Merit award in the recently completed Phase C test. 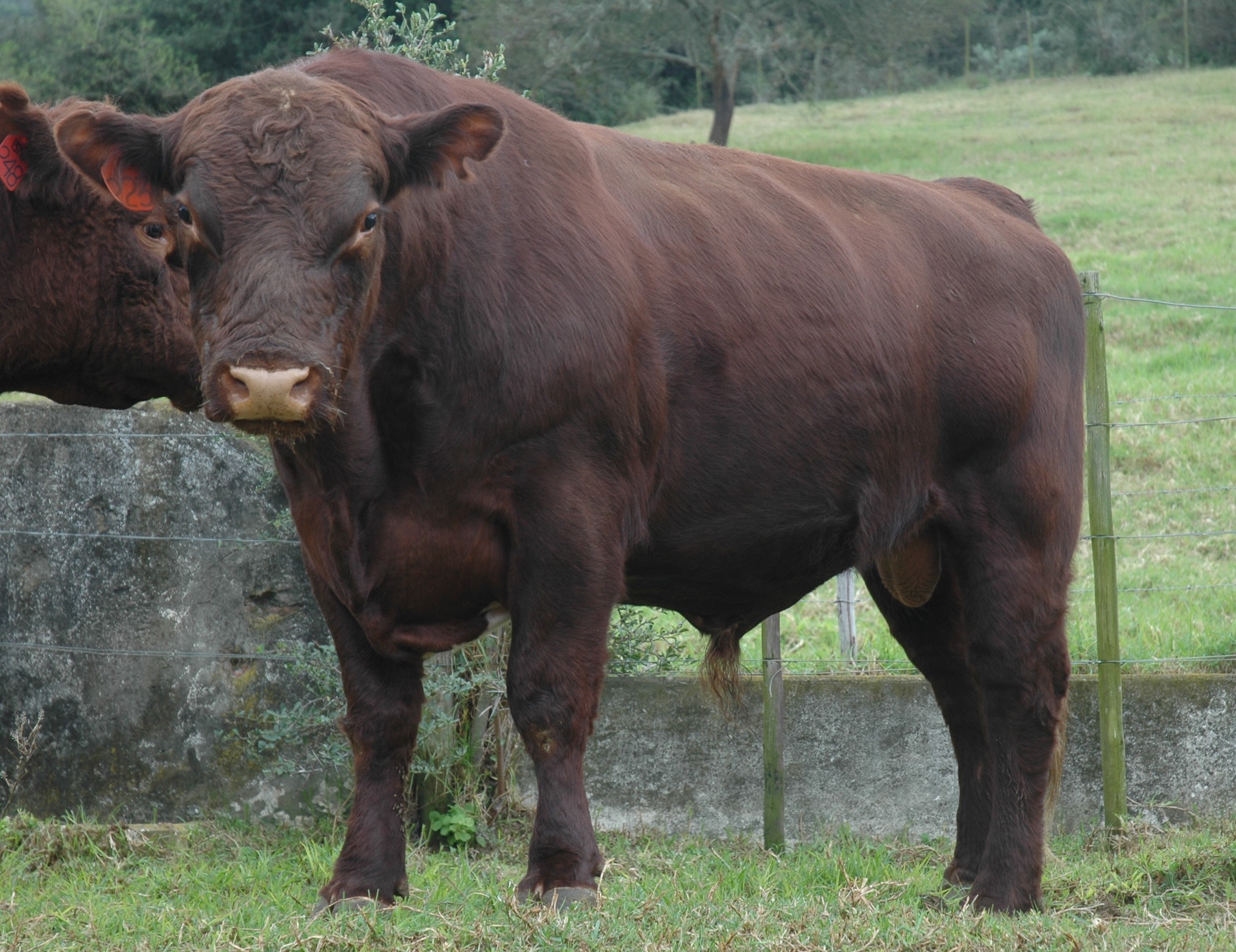 Red, polled. He is another solid red, and a standout son of D. Seraphina 082, the top producing Spry’s All Gold D052 daughter from the Tukulu Seraphina cow family. Slightly more frame than the two bulls above.

His maternal brother by D. Ronin 073, top selling bull at our 2012 Annual Bull Sale to Barry Stretton, Brosterlea, was purchased by Duncan Currie, Lindisfarne, on the 2015 Cathcart Sale

He was not Falkirk Indexed as he was the only bull in his contemporary group. 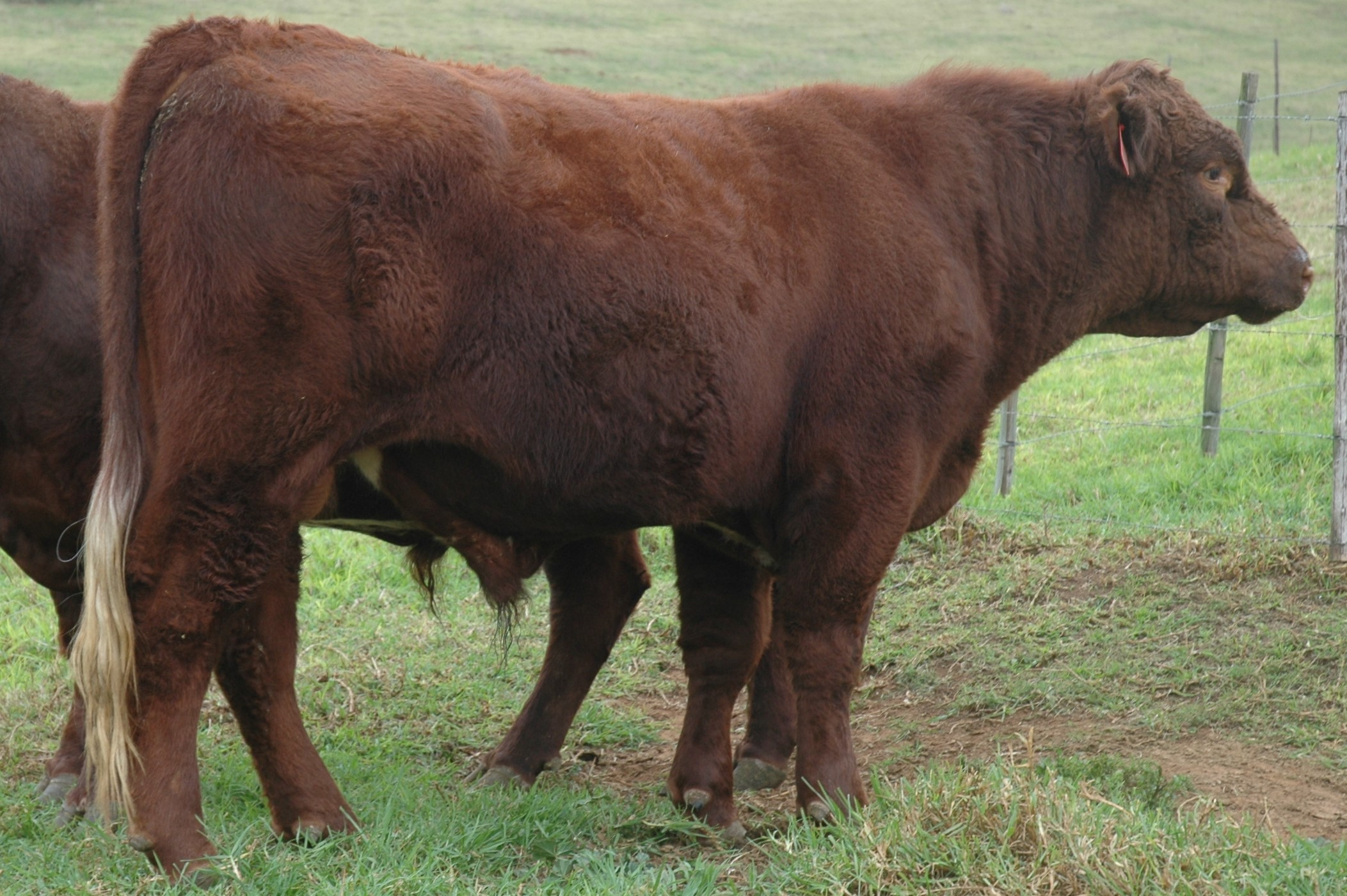 We have 2 three year-old bulls for sale that we will be selling out of hand to interested buyers. Both bulls have been used within the Duncraggan and Primeston herds, with a number of calves on the ground from P. Warranty, and autumn calves expected in 2019 from D. Willy Wonker.

Duncraggan Willy Wonker 337 is a Phase C Silver Merit award bull sired by D. Smashing Stuff 103. We have used him within the herd as a pick-up bull after the autumn joining earlier this year. He is just on 3 years of age this spring, 2019.

D. Willy Wonker was sired by D. Smashing Stuff 103 (below) who has sired 2 Silver Merit sons and 1 Gold Merit son.

Primeston Warranty has the predictable genetics you are looking for! We have seriously stacked genetics to breed us this superb bull. His granddam, Redstone Sunbeam 0553, bred us D. Smashing Stuff 103 (white bull above) and D. Tarantino 159, below, and then we put Tarantino back onto his maternal half-sister to give us Warranty. That’s consistency from the top and bottom of the pedigree! His Dam, D. Sunbeam 053 has done us really well too, and she consistently breeds well. She has an inter-calving period of 374 days over 6 calves.

He is a grandson of Shadybrook Scotty, an EMA trait leader, inheriting Scotty’s width across his back. For this reason, and to breed consistency across the herd with the Crooked Post Stockman 4Z progeny in the pipeline, we are retaining a semen interest in him, and we have used him in-herd already.

Out of his winter coat, he becomes super-slick and smooth, with the most desirable cherry-red colouring one could wish for. He should banish any washed-out yellow/ orange colouring from your herd within a generation.

If you would like to discuss his specifics, availability and pricing further, please feel free to contact us.